by The Green Room in Uncategorized

Reprinted from the Chalmers Center.

But how is the church to take up this task? The world is a big, broken place. Is the church really able to address all the problems we face? Yes, but perhaps in different ways than you might think. The church is the center of God’s plan, as the place where the gospel of Jesus’ kingdom is preached and the people he redeems are gathered in community. These redeemed people are called to be engaged in the mission of the church in various other spheres of life, too.

An Important Task but Not an Exclusive Task

Although the Bible teaches that the local church must care for both the spiritual and physical needs of the poor, it gives Christians some freedom in deciding the extent and manner in which the local church should do this – either directly or indirectly.

But it is not only the local church that must care for the poor. There is evidence in Scripture that individuals (Matthew 25:31-46), families (I Timothy 5:8), and even governments (Daniel 4:27; Psalms 72) have responsibilities to the poor. Christ is the Creator, Sustainer and Reconciler of all things, including all kinds of institutions, and Christians at work in these must faithfully seek to use words and deeds that bear witness to the present and future reign of Christ as much as possible (Matthew 5:16; Colossians 1:15-20).

One way that the church’s responsibility to care for the poor is carried out in complex modern societies is through a wide range of parachurch ministries. While the parachurch should never undertake tasks that are exclusively given to the church – for example, ordination, baptism and the Lord’s supper – there is much that these ministries can do very effectively to care for the materially poor.

Sometimes, a local church might feel it is wise to own and operate a ministry under the direct oversight of its leadership. In other situations, a church might feel that it would be wiser to minister indirectly by starting or supporting a parachurch ministry or simply by encouraging individuals to reach out to the materially poor in their community. Some parachurch ministries may be national or even international in scope (some Christian relief and development agencies, for example) while others will be much more local. Churches need God’s wisdom to determine the best course of action in each situation. However, whenever God’s people choose to minister outside of the local church, they should always be seeking to partner with the local church.

In the New Testament, we see an important principle about how the local church should care for people who are materially poor.  The elders, who led the church, were concerned that the poor should be cared for, but they also wanted to ensure that this care did not distract them from their primary task of preaching and teaching the scriptures (Acts 6:1-7; I Timothy 3:1-5; Titus 1:5-9). To protect the elders’ time, the church appointed deacons to serve under the authority of the elders and care for the poor on behalf of the church (Acts 6:1-7; I Tim. 3:8-13).

Of course, not all churches use the form of church government just described, but the principle remains the same: When a poverty alleviation initiative becomes large or complex, it may distract the leaders who are tasked with preaching and teaching the Word. In such cases, it may be advisable to form parachurch organizations to operate such ministries. This is actually the common practice, as most poverty alleviation ministries are run by parachurch organizations.

You may be asking, “what is the difference between a parachurch ministry and a Christian nonprofit organization?” These terms often refer to the same types of organizations, but emphasize different aspects of their character:

While Chalmers’ books, blog, and trainings use these terms somewhat interchangeably, we do lean more on the term “parachurch,” because we believe it is vital to keep the connection to the local church in mind.  Poverty is rooted in broken relationships, and the only one who can heal those relationships is Jesus Christ, who dwells in the local church, His body, his bride, and his fullness. So while parachurch ministries perform vital functions, they “have power to accomplish their purpose only as they are rooted in and lead back to a believing community,” the community of the local church (Lesslie Newbigin, The Gospel in a Pluralistic Society, 1989, p. 227). 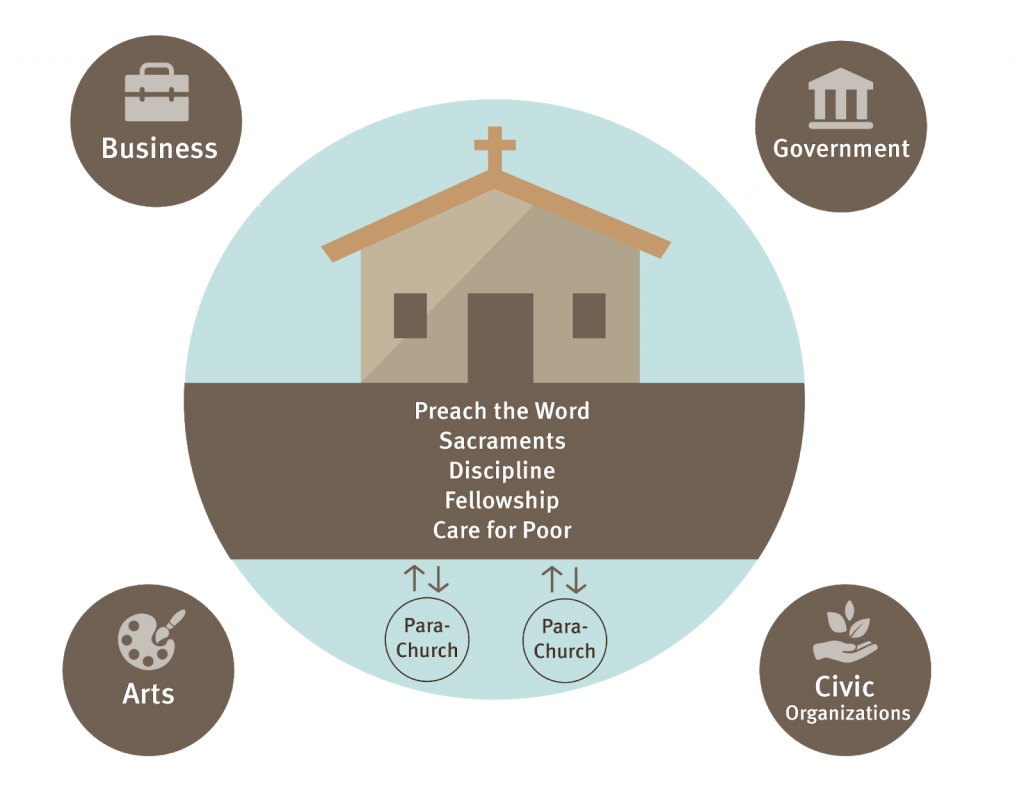 Adapted from Fig. 6.5 in Bryant L. Myers, Walking with the Poor: Principles and Practices of Transformational Development, rev. ed. 2011, p. 199.

Unfortunately, there are often tensions in the relationship between churches and parachurch ministries. Churches sometimes express frustration that parachurch organizations ask for financial support, but then do not collaborate well (or at all) with churches in the communities in which they are both ministering. Although this dynamic is present in most settings, it is particularly challenging in the Majority World, where enormous, global relief and development agencies work in communities that contain churches consisting of small groups of extremely poor people with very little education.

As quoted in Ed Stetzer and David Putman, Breaking the Missional Code: Your Church Can Become a Missionary in Your Community, 2006, p. 173-74.

Too often Christian development professionals see the church as a distraction, or worse, as an impediment to transformation. “The church has separated itself from the rest of the community.” “Churches don’t believe development is something they should be doing.” “The church is not professional enough; it doesn’t know what it is doing.” “Churches have been validating the current economic and political system; they are part of the problem.” We know the litany well.5

Parachurch organizations often have good reasons to be frustrated. Churches frequently lack a kingdom vision that includes ministering to low-income individuals and communities, and even when they capture such a vision, their approaches often do more harm than good. But parachurch ministries have their own problems.

Many parachurch ministries tend to undervalue what the local church brings to the table. They often fail to understand that – because human beings are mind-affections-will-body-relational creatures who long to return to the dwelling place of God – the local church is absolutely essential to human flourishing in general and to poverty alleviation in particular.

Like all of us, materially poor people need the healing power of Jesus. And he is present – mysteriously yet really – when the church administers the “ordinary means of grace”: the preaching of the word, the administration of the sacraments, and prayer. This is the innermost sanctuary of the temple, the very dwelling place of God, the only foundation for restoration to flourishing for all people, including those who are materially poor.

When churches and parachurch ministries embrace their respective callings and begin to work hand-in-hand, both can be part of God’s work of making us whole.

Adapted from Steve Corbett and Brian Fikkert, When Helping Hurts: How to Alleviate Poverty without Hurting the Poor…and Yourself, 2012, p. 44-45; and Brian Fikkert and Kelly M. Kapic, Becoming Whole: Why the Opposite of Poverty Isn’t the American Dream, 2019, p. 257-259.

← Learning from Lean, Part 5
The Case against Work-Life Balance →

One thought on “Church, Parachurch and Poverty Alleviation”