Which Wich Battles the Salad Robots 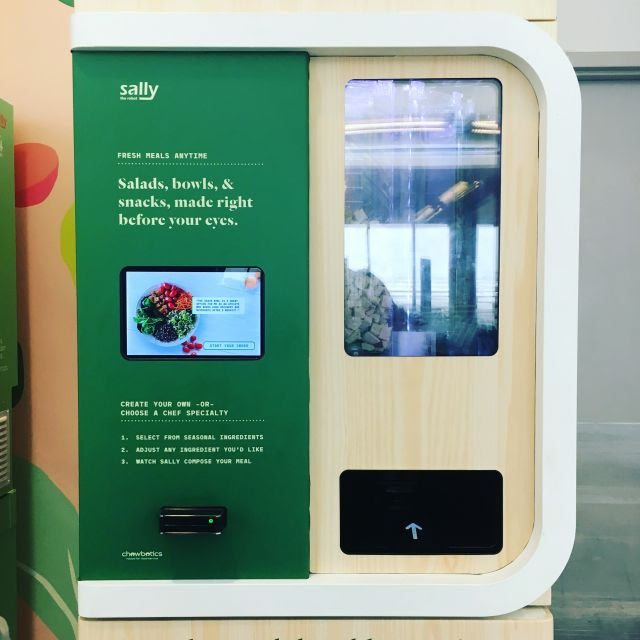 Last week I flew out of the airport in Buffalo, New York, and saw a new thing: Sally, a machine that makes salads. It was just opposite my gate and next to a Which Wich? outlet where humans make sandwiches with their own two hands. Sally is basically a vending machine, except it makes food to order. It also lays bare the fact that it competes with human labor. And in doing so, it brings up important questions about what we value.

I had read about Sally a year ago in a New York Times profile of its (her?) inventor, Deepak Sekar. Sekar doesn’t just advertise his product; he argues for it. Sally, according to Sekar, is great for public health: once someone loads the ingredients into the machine, the customer is the only one who touches them. Sekar also sees Sally as a way for companies to boost productivity, which is to say, a way to keep people working through their lunch hour. Why go across the street for a leisurely meal, when you can get a salad right down the hall, eat it at your desk, and catch up on a few emails? Finally, he and his head chef claim that Sally will create jobs as it gets rolled out to more and more locations and demands human labor to refill it.

The robots-create-jobs argument isn’t very convincing. (The history of ATMs and bank tellers notwithstanding.) Sally will mostly compete with fast food (and fast-casual) restaurants. Each salad Sally spits out is one less sandwich Which Wich? workers make along their allegedly streamlined but actually confusing production line. The whole point of Sally is that there are fewer workers! Someone, somewhere, is losing their job.

Sekar’s argument may not be convincing — but it is interesting. It’s a great illustration of our culture’s weird, ambivalent attitude toward the value of work. On the one hand, Sekar can only sell the machine if he can convince prospective buyers that it’s more profitable than a freestanding restaurant, with all its labor costs. But he also needs to sell it to an American public that thinks a job is the sole path to a dignified, meaningful life. (See my recent Hedgehog Review essay for more on the problem of work and meaning.) So he needs to say it will somehow create jobs. Maybe he needs to convince himself he’s a job-creator, a demigod of our era.

I did not get a salad, so I can’t tell you about the price or quality. (I got a hot dog at a nearby stand instead: cheap, adequate, and “crafted” by a human being.) An entree-sized salad from a Sally at a Chattanooga children’s hospital costs $7.99. And the paper of record’s headline declares the salads “mean,” so they must be good.

Sally seems like an effort to cure “cost disease” in dining — an industry that, like education and health care, remains stubbornly inefficient because it depends so much on human interaction. But who’s getting the surplus value on an $8, machine-made salad? Which Wich? sandwiches are also about $8, even with the restaurant’s much higher labor and overhead. Sally isn’t saving the consumer money. It’s just more profitable to the owner. That’s it.

We’re surely going to see more machines like Sally in our offices, malls, and airports in the coming years. Is it inevitable that this is just how we’ll all dine eventually?

No. There’s an alternative: We could resist all the pressure to work through lunch. We could patronize low-margin sandwich, salad, pizza, and taco shops. We could resist the “cost disease” story and instead accept that some things — our food, our health, our education, our performing arts — are worth paying a little more for.

It basically means we could value humans ahead of efficiency. Of course, if we really did that, and we built our economy around the inherent worth of people, then we also might not be so terrified when machines seem to put jobs at risk.

I’m a writer and a former professor and parking lot attendant. I cover work, religion, and education, and I’m currently writing a book about the spiritual costs of the American work ethic.This post is reprinted from my newsletter. Subscribe here!  Image: Jon Malesic.

← Babble On: The Impossible Transformation of the Spirit
The Faith and Work Movement Has a Problem →