“A Self-Fulfilling Prophecy” – Book Review of BS Jobs : A Theory 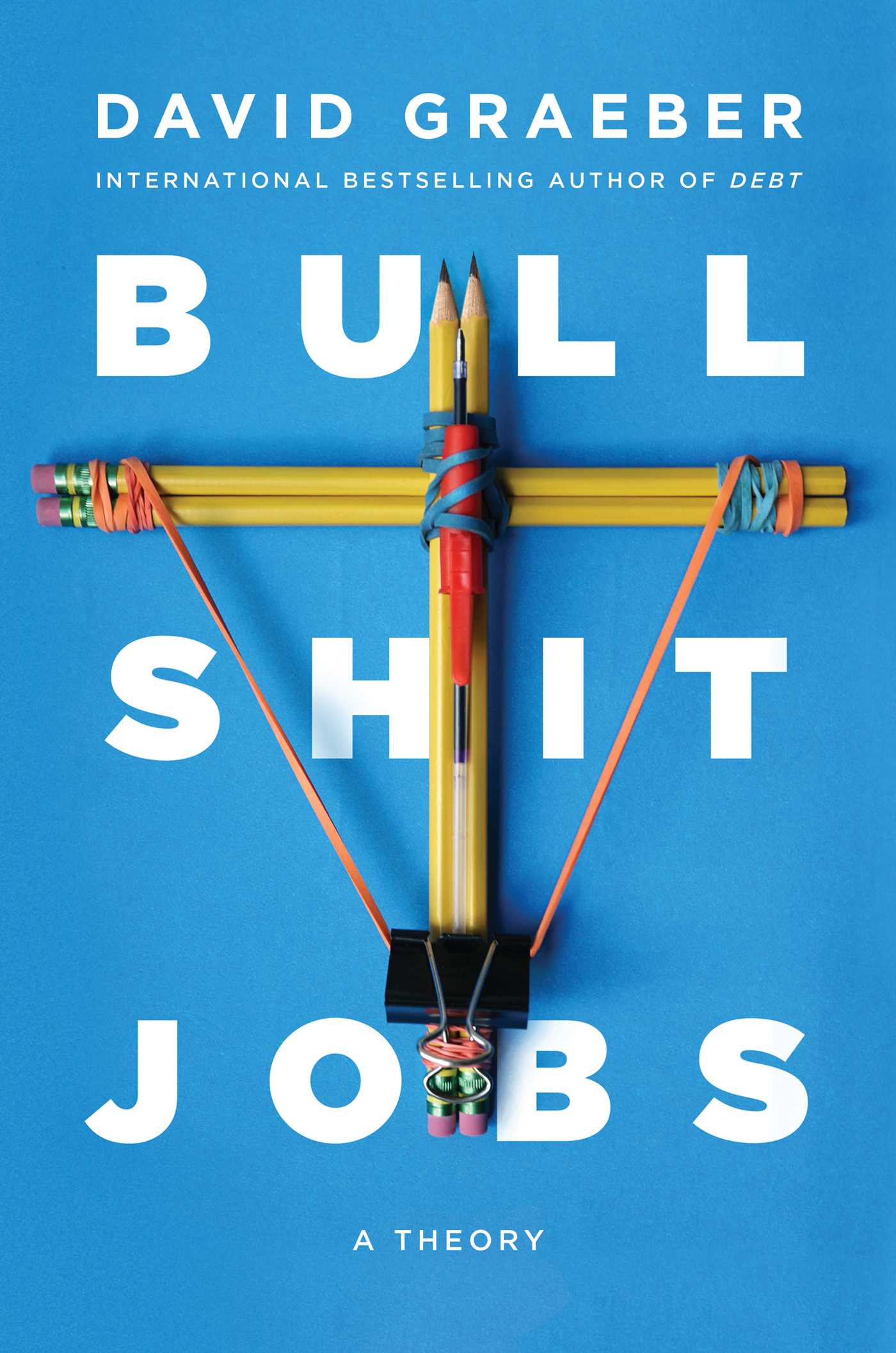 I once knew an assistant coach who had a copy of a book entitled Your Body Believes Every Word You Say on his desk. It appeared to be both an old book with a dated cover photo and an unread volume with a pristine binding, which led me to ask him about it. He told me it was a great book and important to his work as a coach. I asked him what the book said. His response was classic: he informed me that he had never read it, but the title said everything he needed to know, which was exactly what he had been told when the book was presented to him by a former colleague who had also never read it.

With such a provocative title, Bullshit Jobs: A Theory by David Graeber is destined to either for boom or bust. Much like my former coach’s book, the title tells the reader pretty much everything they need to know about the book.

The thesis of Graeber’s book is fairly simple: the number of jobs that add no societal value has grown immensely and it is making people miserable. These allegedly valueless jobs are labeled bullshit jobs, which Graeber defines as “a form of paid employment that is so completely pointless, unnecessary, or pernicious that even the employee cannot justify its existence even though, as part of the conditions of employment, the employee feels obligated to pretend this is not the case.” (p. 9-10) Having encountered some people in the workforce who jobs seemed to add little value to the wellbeing of the organization or its customers, I was intrigued at an early stage by Graeber’s theory.

However, that early interest soon turned into disappointment, as the quality of the research or writing simply does not support the significance of Graeber’s thesis. The most significant statistic Graeber cites throughout his works is from a YouGov survey done on people’s understanding of the social value and self-fulfillment of their jobs. According to the survey, 37% of the respondents felt their work made no meaningful contribution to the world. This, Graeber argues, means they have B.S. jobs.

In examining the survey, the conclusion Graeber draws is not entirely clear, since the word “meaningful” is undefined. For example, in comparison to the work of a world-leading cancer researcher, a general practitioner may feel she has a meaningless job, while a rent-a-clown may feel he meaningfully enhances the joy of 7-year-olds across his town.

This one survey forms the main statistical evidence for Graeber’s theory. However, his ability to handle statistics logically is brought into question with statements like the following:

The YouGov poll found that while 37 percent of all British workers felt their work served no purpose, only 33 percent of workers found it unfulfilling. Logically, then, at least 4 percent of the working population feel their jobs are pointless but enjoy them anyway. (p. 104-105)

It does not take an advanced degree in statistics to note the problem with Graeber’s reading of these stats. Specifically, there need not be any overlap at all between the 33% and the 37%. In fact, as the data in the survey results published online show, 40% of the people who identify their work as something less than meaningful are fulfilled (another term without definition) by their jobs, while 15% of those who think their work is meaningful feel unfulfilled. There is a correlation, but nothing like the tight connection Graeber assumes.

In fact, much of the book is a methodological nightmare. A large portion of the evidence is anecdotal, collected from comments on the web by people who agree with Graeber as well as those who emailed him at an account set up to collect stories from people who were unhappy with their work. In other words, the problem of self-selection and confirmation bias loom large over the entire volume. (He notes this in passing comments a couple of times through the book.)

Additionally, the documented research in the volume is insufficient given the changes Graeber wants to make based on his theory. He scatters superscript numerals throughout the text of each chapter that refer to endnotes. This, I suppose, gives some readers a sense of confidence. However, when a careful reader checks out the content of his notes, she will find a large portion of those notes are merely the author’s parenthetical comments or additional nuggets from emails sent by his followers. This book is full of sound and fury, but with little substance.

With its catchy title, this book is likely to spark some conversations despite its significant flaws, especially for those who read the title and not the text. However, despite the problems with the book, there are some truths that Graeber uncovers that are important for the faith and work movement.

First, many people fail to see the value of their work. As a result, according to Graeber’s anecdotes, this leads them to dislike their work, be inefficient at it, and develop a sense of self-loathing because they recognize they are wasting their time and their employer’s time. Meaninglessness in work appears to be, at least in part, a self-fulfilling prophecy. The faith and work movement can speak into this by both recognizing that there probably are jobs that are not meaningful that should be avoided and helping people to see how their small contributions to the world can make a big difference.

Second, Graeber recognizes how important for the soul it is to have meaningful work. The central goal of the faith and work movement is to help people see the meaning in their work. If someone raises Graeber’s book as a counter-example to the possibility of the integration of faith and work, his own arguments about the “spiritual violence” of work without meaning underline the importance of helping people see the value of their vocations.

Third, this volume makes clear just how far the discussion of the value of work and the possibility of integrating faith with work has to go. Graeber managed to put together a 280-page book without encountering the idea that one’s faith can meaningfully contribute to one’s work—the movement escaped even a derisive sidebar comment, which is what I would have expected in a book of this tone. However, this reveals that while our movement has had a significant impact in a very limited circle it needs to continue to spread to wider audiences.

Bullshit Jobs promises a theory on what ails contemporary working society. It fails to deliver because it lacks the rigor, thought, and support that such an audacious thesis warrants. This is a book that is likely to incite some conversations, convince those already convinced, and provide a snicker-worthy citation to college sophomores seeking to be edgy. For those engaged in serious consideration of the truth about work, Graeber’s book is most helpful in what he reveals by accident and in providing an extreme foil for more reasonable arguments.

Andrew J. Spencer lives in Monroe, MI. He is a Senior Research Fellow for the Institute for Faith, Work, and Economics. He writes regularly at EthicsAndCulture.com.

← How Rest Can Save the Conversation on Vocation From Itself, Part 3: Finding Rest in a Restless World
Looking Forward to the 2018 Faith at Work Summit: An Interview with Al Erisman →